Do something incredibly different (+ fun).
Have a TOTALLY RAD Philly Birthday Party at
Escape The 1980s IN CENTER CITY! 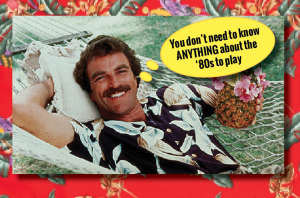 Do we dare promise that you can have a supercalafragelisticly fun birthday before you even sip a drop of alcohol? Yes we do. Scout’s Honor.

You want to be the one that leads everyone to laughter, excitement and thrill? You want to find the event that will be all over Facebook the next day — and that they’ll talk about for weeks?

Go back in time to the righteous land of the 80s. From Atari to fanny packs… from video tapes to walkie talkies — you”ll blast into a timewarp with one, single mission: To get back to the future.

Celebrate at a top Philly birthday spot! Have a 1980s style party at the largest and highest rated room escape game in the city.

Birthday Parties are
so much fun here.

Number of Players – Each escape game holds up to 14. Come for just the game, or book back to back games and have drinks at the bar!

FREE Birthday Gift – The guest of honor will receive a special 80’s headband and the role of Team Leader (and given a walkie talkie and fanny pack to use).

5 mins from City Hall (& FREE Beers)  –  We’re in Center City Philadelphia at the Bourse — a food court and mall PACKED with 5-star restaurants, hipster bars, yuppie hangs and really cool little shops. It’s easy to park and there’s LOTS to do afterwards (like using the FREE BEER cards you won in the game).

Photo Prints – Want to give the birthday players a take-home gift? We offer printed game photos with a wacked out, magnetic 80s frame… and they’re CHEAP (5/$25). Buy them on the spot — or in advance.

Want to get ice cream for everyone afterwards? A few steps through the Bourse building, you’ll find Scoop Deville, offering discounted birthday party ice cream pakages for Escape The 1980s guests that order in advance! Contact them to find out more.

Play the game and have a party in the Bourse Food Court!

Dozens of food options, drinks, shops and more. Have an after party in the Bourse! Click here to see everything inside.

There’s only one Escape The 1980s™ game in the world — written and built from scratch by Steel Owl Productions — the same group that did the Escape Games at The Franklin Institute. It’s right here in Philadelphia. If you don’t play it here, you’ll never play it.

Created by Steel Owl Productions – Steel Owl Productions build experiences for large companies like Autodesk and museums like The Franklin Institute! We’ve given seminars across the country, written books, and we have our own tech company. But really, our games are built on laughter and the flurry of surprise. Escape the 1980s was the first “80s” escape game in the world (for real. this isn’t a joke). It was written by the owners… and we only have one location; right here in Philadelphia. You’ve never played this game before if you haven’t played it here.